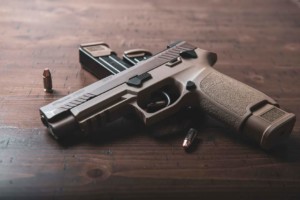 When it comes to handgun shooting, people are often baffled by how much precision is required. It’s easy to be misled by TV, movies, or even watching professional shooters. In reality, it takes a lot of time and discipline to become an accurate, efficient, and intuitive handgun shooter.

However, shooting is an addictive and exciting sport. It’s fun, practical, and can even have health benefits. But all of this can be negated if you feel like you’re getting nowhere on the range.

If you’re new to shooting handguns or know that there’s room for improvement in your performance, we can help. Keep reading for the most common handgun shooting mistakes and how to correct them.

The foundation of any physical sport comes down to your stance. While shooting, your stance needs to be balanced and steady. There are two major types of stances you should choose from: the weaver and the isosceles.

The isosceles stance is best for those wearing body armor because the shooter is squared up with the target, exposing their entire midsection. The shooter stands with their feet slightly wider than shoulder-width apart, feet aligned. However, this stance allows the shooter to extend the handgun directly out in front of them, providing a more central aim.

The weaver stance allows the shooter to blade their body from their target, minimizing their midsection exposure. Their feet are roughly shoulder-width apart but staggered, much like a boxing position. This stance is more natural and provides a pushing and pulling tension on the gun, giving the shooter isometric control over the recoil.

How you grip your weapon is vital to your accuracy. There’s a lot of bad examples out there on TV and in the movies. For example, the teacup grip (the support hand cups the firing hand from the bottom) is often used by inexperienced actors unaccustomed to shooting.

Most handguns are universal when it comes to their sights. There’s a rear sight with two prongs and a front middle sight. How you align these sights is paramount to hitting your target.

If your rear sight or target is in focus, you’re doing it wrong.

One of the biggest issues people have with handgun shooting is not knowing how to use their trigger finger. Once again, Hollywood is no help. Actors are often wrapping their entire trigger finger around the trigger, which is a common, but significant mistake.

Be conscious of your other fingers. People don’t realize how much their body works synonymously. When you’re pulling the trigger, the fingers and thumbs on both hands will want to move as well.

This excess movement and tension will destroy your accuracy.

While we all know guns are loud and the recoil can be violent, the last thing you want to do is anticipate the shot. When handgun shooting, anticipating the shot can have several negative side effects.

For example, many new shooters grip the gun too tightly trying to anticipate the recoil. In this scenario, your shots would land well below where you were aiming because you inadvertently drove the muzzle downward.

Instead, remember to squeeze the slack out of the trigger. Pause to perfect sight alignment, focusing on your front sight, then continue to squeeze by pulling your trigger finger straight back. Each shot should come as a surprise to you.

Another common mistake when handgun shooting is failing to use your dominant eye. If you’re a right-handed shooter, you should be using your right eye. However, this doesn’t mean you should close your left eye, as you might think.

In an ideal world, you should be shooting with both eyes open. While closing your non-dominant eye allows you to focus better with your dominant eye (for newbies), it also takes away your depth perception and spatial awareness.

For stationary target shooting, this isn’t terrible. However, in a real-world situation, you need your depth perception and peripheral vision.

While some people pick up handgun shooting simply for the fun of it, many of us who practice the skill do so for self-defense purposes. While the odds of you ever needing to pull or fire your weapon at another human being are statistically low, there’s a difference between target shooting and training to defend yourself. These distinctions can mean the difference between life and death.

If you’re going to carry a gun for self-defense, you need to practice your draw hundreds, if not thousands of times to make it seamless. You also need to practice point-and-shoot drills, reloading, jam/blockage clearing, moving, using cover, and more.

Finally, handgun shooting requires a certain level of respect for gun safety. Accidental gun deaths and injuries happen but can be avoided.

Make sure you’ve memorized the following gun safety rules before going out to the range and certainly before carrying a firearm for self-defense.

If you’re looking to improve your handgun shooting skills, we still have more to offer. Take a look at some of our training courses. We have private lessons, safety courses, and an amazing Gunslinger Academy for people looking to get into competitive shooting.