Getting Started as a Gun Shooter 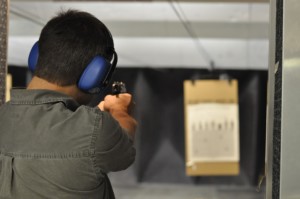 We get it. We’ve all been there before. Shooting a gun for the first time can be really intimidating no matter how old you are or how you feel about firearms. You’re holding a lot of power in your hands. That’s why it’s important to know the first thing in getting started as a gun shooter is how to safely use a gun.

About 30% of U.S. adults have never shot a gun before, and only two-thirds have ever lived in a household with a gun. Many of those who have shot a gun before having limited experience and don’t own a gun. Only 30% of people surveyed by the Pew Research Center say they currently own a gun. Another 36% are open to the idea of owning a gun at some point in the future.

This shows that there’s interest in shooting and exposure to guns, but the majority of Americans are far from proficient.

How the Body and Brain React to Shooting a Gun

Another aspect of shooting that’s been researched is how the brain and body react. Research has shown when novices shoot a gun it triggers the flight or fight response because the experience is startling. Your hands may sweat, your heart may start racing and you may get a rush of excitement.

The brain kicks into overdrive producing a surge of adrenaline, cortisol, dopamine and serotonin. People who are new to shooting typically feel anxious, aggressive, fearful or a mixture of these emotions because of the hormones.

There’s an automatic response in the body as well. You’ll probably start breathing faster, your heart rate will quicken and blood pressure will go up. If you look closely at a novice shooter you’ll notice that their pupils are dilated to enhance sight. Inside the body, the digestive system goes into a paused state, which is why some novices experience lite nausea if they’ve eaten shortly before shooting a gun.

All this is a natural reaction that happens to many people. Others may find that they enjoy it are comfortable with it immediately. Training is the primary way for novices to overcome the sensations that come with getting started shooting a gun. Shooting repeatedly helps you manage the bodily reactions so that you can stay cool, calm and collected. Having a professional shooting instructor by your side the first few times you practice also makes a big difference.

The #1 reason people say they own a gun is for protection. But the only way a gun can really provide protection is if the owner knows how to safely use it.

Often the fear surrounding guns comes from lack of experience rather than actual incidents involving threats. Once a person learns how to safely fire a gun, fear gives way to respect the power of firearms. You’ll feel safer and may even feel empowered as a result of knowing how to proficiently use a firearm.

In addition to talking with children about gun safety, taking a gun safety course with your kids is a great idea. It’s a point that the majority of gun owners and non-owners agree on. A gun safety course will go over the essentials of safely operating and storing a gun while emphasizing the importance that guns are not toys.

Interested in shooting a gun but concerned about safety? We’ve developed the First Shots introduction to shooting course for anyone who is new to firearms. The course helps you get past mental barriers of shooting a gun in a safe, controlled environment. An experienced instructor will explain safe gun handling and provide individual training before participants shoot targets at the range. We are here to provide you with all the tools and resources you need to getting started as a gun shooter.  After completing the seminar you’ll also receive a $25 coupon to use the next time you visit Texas Gun Club.

Build your confidence as a new shooter – sign up for the next First Shots seminar!