The Most Common Types of Guns Explained 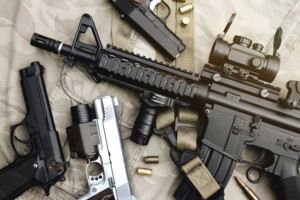 30% of adults in the United States own a gun while 42% live in a home with someone who owns a gun according to a survey conducted by the Pew Research Center. Guns are part of the American culture as about 48% of adults in the U.S. grew up in homes with firearms.

59% of U.S. adults have friends who are gun owners and 72% have fired a gun before. Gun owners usually have multiple guns in their homes, 66% own more than one while 29% have more than five.

The types of guns in American homes vary but the most common is the handgun or pistol, 72% of gun owners have these. 62% of American adults who own guns have a rifle while 54% have a shotgun.

The reasons for gun ownership vary but the majority of gun owners, about two-thirds, own a gun for protection. 38% of gun owners purchase firearms for hunting while 30% have them for sport shooting.

Keep reading to learn more about the most common types of guns and how they’re used.

There are many different guns on the market but the pistol is the most common. A pistol is a type of handgun that can be best described as only needing one hand to fire it. Two hands are recommended to keep the firearm steady, however.

This means that you won’t need any shoulder support to shoot it. A pistol is also classified by a barrel length of 16 inches or less.

Pistols are often purchased to keep as a form of protection and are also great to practice shooting on the range. Semi-automatic pistols require you to load the gun and pull the slide back. This will eject the old round and place a new one in the chamber.

Pistols are so common because they’re easy to load and rarely ever jam. They carry a good amount of bullets too, often more than other types of handguns.

Among all the types of firearms, rifles are some of the most popular with hunters. Hunting is a popular sport in the U.S., over 15.6 million hunting licenses were bought in 2018.

In Texas, there were over one million hunting licenses purchased in 2018. This is one of the highest numbers in the country.

Rifles are a common type of long gun. The caliber and size can vary from rifle to rifle, however.

The basic features of a rifle include using the shoulder for support and firing with both hands. The inside of the barrel has rifling, these are grooves inside the barrel, to help stabilize the bullet as it spins out.

A rifle is also characterized by a barrel that’s longer than 16 inches. Each pull of the trigger is able to fire only one projectile.

A bolt action rifle typically has the bolt on the right side and is used by unlocking it and pulling it back. A lever-action rifle has the lever near the trigger guard of the rifle and is used to load ammunition into the chamber. Both of these rifles are used for sport.

Semi-automatic rifles are self-loading and use recoil energy to eject the old shell and place the next round in the chamber. Some rifles also have pump action which requires the gun user to use a sliding technique to expel the used shells and load the new shells. Muzzle-loading rifles are loaded from the front of the firearm.

Next on the list of kinds of guns is the revolver. This is another type of handgun similar to the pistol as it can be shot using one hand and doesn’t need shoulder support to get a good shot. The barrel length of a revolver is also less than 16 inches.

What’s different about the revolver is that the cartridges are placed in chambers that rotate around in a cylinder to align with the barrel of the gun, they don’t align on their own like other guns.

The revolver is great to use on the range, especially for new gun owners as they’re easier to use. They aren’t able to hold as many bullets as other handguns like pistols and the reloading process can take longer than usual but they’re great firearms to use.

Whichever gun you start with, it’s important to get the proper training on how to load it and shoot it safely. What better way to learn than by taking a gun safety course with one of our professional instructors at Texas Gun Club. You’ll leave the class with more knowledge and skills no matter what experience you have with firearms.

Last on our list of gun types is the shotgun. Shotguns are typically fired using both hands and shoulder support.

It only fires once every time the trigger is pulled. The barrel is smooth and longer than 18 inches. The smooth barrel allows a variety of ammo to be used with the shotgun.

Pump-action shotguns use a pump to eject old shells and move new ones into the chamber. Semi-automatic shotguns, like many other semi-automatic firearms, use recoil energy or gas to eject the used shells.

The popular double-barrel shotgun is a popular break-action firearm. The gun user pushes a lever that pushes the barrel forward to load new shells into the chamber and remove them as well.

Everything You Should Know About the Most Common Types of Guns

The guns listed above are the most common types of guns. Rifles are popular with hunters and handguns, like pistols and revolvers, are great for new users and range shooting.

At Texas Gun Club there are plenty of training courses you can take to learn how to use a firearm safely. We also offer access to our range and have special events. Contact us with any questions you may have.